ART OVER THERE/ THE UNIVERSAL ADDRESSABILITY OF DUMB THINGS.

A REVIEW BY REBECCA BELL. 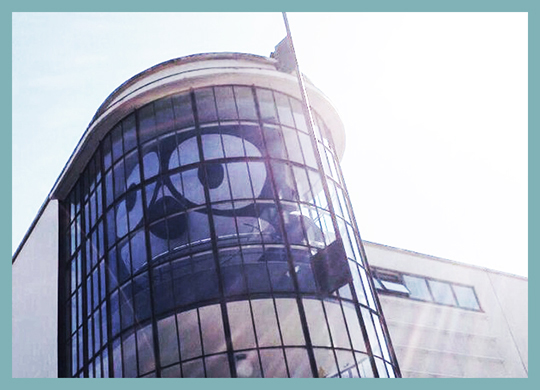 Art Over There at the De La Warr Pavilion, Bexhill on Sea. Current exhibition: The Universal Addressability of Dumb Things. 13 July – 20 October 2013

Along the coast from Hastings the modernist De La Warr Pavilion sits in splendour against a backdrop of faded seaside optimism: Bexhill on Sea is that quintessentially British mix of red brick housing, sea-facing decorative Victorian buildings and chain shop-filled high street, illuminated on the day of visiting with a strange grey light. But the Pavilion itself, designed in 1935 by architects Erich Mendelsohn and Serge Chermayeff is a bastion of International Style decisiveness and purpose. Straddling the relatively newly landscaped sea front the building seems to continually drive forward, both a static ship and lighthouse looking outwards to the watery horizon whilst drawing the sea light and landscape into itself.

The Pavilion’s clean white lines are juxtaposed against its neighbouring buildings, a row of Edwardian, Mughal-inspired cottages even closer to the sea. They are a striking combination of Colonial architectural detail, originally built for retired officers and civil servants who had served in India.  The companionable and yet slightly uncomfortable partnering of these very different buildings is not dissimilar to the effect of the current exhibition within the De La Warr Pavilion, The Universal Addressability of Dumb Things, curated by Mark Leckey.

Pressing against the curved glass of the building’s front is a giant inflatable figure of Felix the Cat, the first image ever transmitted on TV. The black and white grin of this well-known character creates an air of the unreal before you enter the building, a mixture of animate and inanimate, familiar and unfamiliar. And so this continues in Leckey’s assemblage of objects, varying from videos, machines, archaeological artefacts, iconic objects and both contemporary and historical works of art. Loosely divided into themes of Bodies, Animals and Machines, Leckey’s gathering of objects was apparently inspired by his interest in Cybernetics and studying everything as a form of system with “its own ecology”, wherein component parts can talk to one another and create something more powerful than themselves. Leckey explains, “We’re back in a world where things are greater than ourselves, and we are no longer central to that narrative”. He refers to digitisation and current technology as a process recalling elements of our ancestral past, where ancient civilisations believed spirits inhabited objects, plants and animals. In our current reality, the real and virtual similarly co-exist; phones give us directions and websites predict what we want whilst digitising objects allowed them to “disappear” from the material world and re-emerge in any place or era. 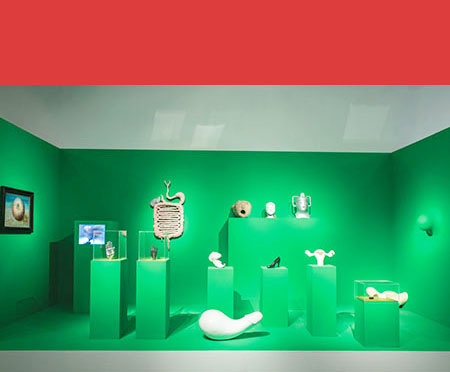 It is this relationship that offers a connection to the theme of Art Over There: the objects with which we share our lives or space (be it virtual or ‘real’) have a continually changing ‘hereness’ or ‘thereness’, apparently connected and present at some points then remaining contained and abstract at others. In particular, Leckey explores the concept of techno-atavism, whereby objects and environments become ‘quasi-alive’. One object selected to demonstrate the pervasive communication of modern technology is Prunella Clough’s Electrical Installation III (1959), depicting an urban ‘mechanical landscape’; the artist believed that the “evidence of human ingenuity” could be found in machines. Perhaps demonstrating this innate activity of an object, nearby sits Leckey’s own Soundsystem (2013), a monolith described by the artist as a “big surrogate voice box”, referencing his interest in music and club culture whilst demonstrating how an object can engage and transform its environment and audience. 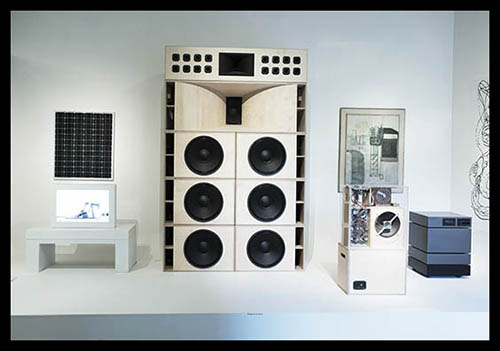 Transformative power and overlaps between a human and non-human world are also illustrated by a set of objects displaying points where the animal kingdom crosses spiritual and physical boundaries to communicate with us and each other.  Piero di Cosimo’s The Forest Fire (c. 1495-1508) shows a Renaissance perspective on the origins of civilisation and man’s dominance over the animal kingdom, a rich world of animals and mythical beasts. In the same section of the exhibition is a Hapi Canopic Jar from c. 664-332 BC, an Ancient Egyptian run to hold and protect the inner organs of the deceased. Such crossovers from physical to spiritual, real to mythical are further explored in a series of objects which particularly aim to examine altered states where our connection to the world is fragile, where darkness and anxiety comes to the fore. Here Louise Bourgeois’ NATURE STUDY (1984), a hybrid form combining male and female genitalia which relates to themes of the body and pregnancy, is placed within the same dark, UV lit gallery space as a vision drawn by William Blake in The Ghost of a Flea (c. 1819-1820) and Nicola Hicks’s Maquette for Crouching Minotaur (2002-2003).

Leckey’s layering of narrative, historical and contemporary references, gathering of objects made for such contrasting purposes, is potent and thought-provoking. The touring exhibition has carefully designed spaces using bold coloured display alcoves reminiscent of a traditional museum, allowing the viewer to stand beyond a fourth wall and absorb the objects as an entity. Within each space, the items are placed on the floor and altering levels of modern plinth. The clarity of display denotes Leckey’s interest inCybernetics, an approach for exploring regulatory systems, their structures, constraints, and possibilities. Cybernetics is relevant to the study of systems, such as mechanical, physical, biological, cognitive, and social systems: all of these can be found in The Universal Addressability of Dumb Things. 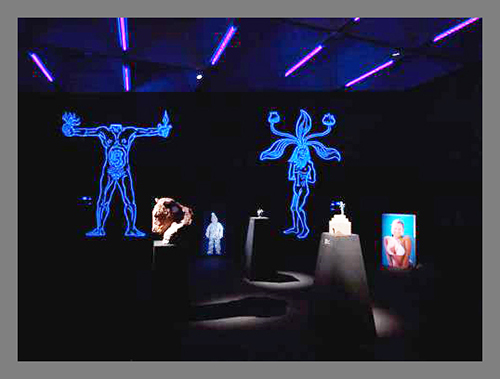 But the main impact was the wonder of these objects and the sheer privilege of our being able to see them in one place, from ancient artefacts all the way to Roger HiornsRoger Hiorns and Aphex Twin. In the same way as Leckey’s fellow Turner Prize-winning artist Grayson Perry’s exhibition The Tomb of the Unknown Craftsman brought together awe-inspiring feats of human exploration under the umbrella of craftsmanship at the British Museum in 2011, so too does Leckey throw new light onto works drawn from a spectrum of human creativity and purpose. Their interaction is indeed far from dumb, they speak in loud voices of their own values as well as calling into question the meaning of their exhibition companion pieces. They could indeed risk becoming a clamour of noise, so much do they all have to communicate. This is held in check by the somewhat sterile and scientific nature of their display.  The latter helps rather than hinders the accessibility and richness of the exhibition’s narrative.

Seeing this exhibition at the De La Warr Pavillion was a further privilege, not so much because Leckey has achieved something great but because this is a museum and site that strikes home the wonder of being human amongst the physical. From the clean, industrial lines of the Pavilion to the heaving weight of sea water beyond, the pointed decorative roofs of the colonial sea-front cottages and high seaside facades, it’s an environment of contrasts against which the body seems to resonate. This combined with Leckey’s exhibition in part supports his statement that “The status of objects is changing, and we are once again in thrall to an enchanted world full of transformations and correspondences, a wonderful instability of things animate and inanimate, animal and human, mental and material”.

For more information on the ART OVER THERE SEASON please click HERE.