ART OVER THERE / CERTAINTY, AMBIGUITY AND THE RIDDLE IN A MOON MAP. BY CATHY HAYNES.

Republished especially for Slashstroke’s Art Over There season, the following text was written by Cathy Haynes as a ‘leader’ for BBC Radio 4s Human Zoo, a show exploring human foibles, quirks and behaviour. Haynes’ piece was originally broadcast on 9 April 2013 and looks at certainty, ambiguity and the riddle in the first accurate map of the moon. 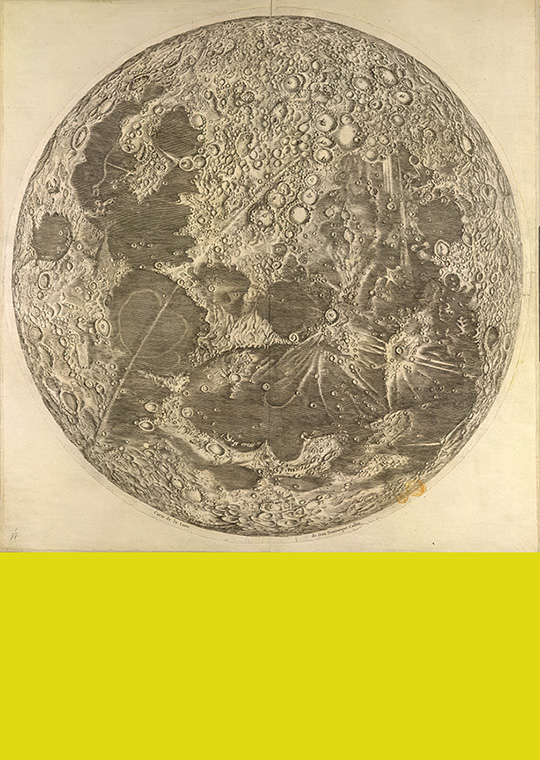 CERTAINTY, AMBIGUITY AND THE RIDDLE IN A MOON MAP.

I’m looking at an old map of the moon – a plump, pitted disk on thick yellowish paper. This is the first scientifically accurate lunar map. The astronomer Giovanni Domenico Cassini made it in around 1679, after years of peering at the moon through telescopes. His map gave a clearer understanding of the moon’s surface than we had of the Earth at that time. You could say it’s a masterwork of certainty.

And for me, certainty is what makes maps so seductive. Maps edit and order the tangled chaos of reality. They solidify the facts from a world of flux.

But there’s something odd in Cassini’s moon. If you look closely at the edge of the Sea of Rains [Mare Imbrium] where the cliffs of the Heraclides Promontory should be, you’ll see instead the tiny head of a woman.* Frustratingly there’s no reason recorded for it being there. So why is there a miniature fiction inside this picture of what seems to be perfect fact?

Some believe the map’s engraver put it there. But surely hawk-eyed Cassini would have noticed. Maybe it’s just a joke. Many have thought that’s all it is. But my itch to know won’t leave it there. And I suspect, by leaving a little mystery intact in his unmasked moon, that’s what Cassini wanted – to tease us with the never-knowing.

Impossibly, Cassini’s map is two things at once – an essay in certainty and ambiguity. It seems to be saying that the one can’t be free of the other, that I shouldn’t let the tidy static surface of the map blind me to the fluctuating, complex, random reality beyond it.

Reason and sanity requires us to accept what is unpredictable and unknown. There are times of course when we need clarity, decisive judgement, plain facts. I want my dentist to know for sure which tooth needs drilling. And I prefer my politicians to be free of doublespeak. But the drive for absolute certainty means not being able to tolerate ambiguity, difference, change. At its most extreme that’s the mindset of the totalitarian and the tyrant who violently force reality to conform to the plan. At its most dreary, it’s the person who wants a world free of questions.

This makes me wonder how much I play a part in an economy of certainty where facts and opinions are traded like commodities, stockpiled for status – and where good questions are devalued in favour of neat answers. But Cassini’s mysterious little figure in the map poses questions that I can’t answer with fact. I can only wonder and speculate why it’s there. And that, ultimately, feels like a liberation. This splendidly unfathomable thing throws me back on my imagination. It opens up a universe of possibility and dreaming in place of the mental poverty of total certainty.

Cassini was an early pioneer in the drive to map, measure and know the universe. But to me it’s just as important that his great achievement also contains a petition for dreaming, wonder and doubt. The mysterious figure in his moon seems to stand for acknowledging the limits of certainty, and that the fullness of existence exceeds the maps we make of it. As we measure and account for everything in ever-closer detail, I hope that’s something we never forget.

Now looking at the map again I’m caught in a curious tension between wanting to know and hoping I never find out why Cassini put a figure in his moon. So I hesitate to ask this but, do you think you know?

NOTES: These thoughts on Cassini’s map came out of the research exhibition I made on falsities in maps called No Such Place. Here are the exhibition notes.

*When you look at the cliffs and shadows of the Heraclides Promontory through a telescope today it does vaguely resemble a woman’s head. It seems all Cassini did was to exaggerate that resemblance.

For the Broadcast  listen again here.

Cathy Haynes is a London-based curator, artist, writer and educator. She is a founder faculty member at The School of Life, where she was also formerly its Curator. She is Timekeeper in residence at the UCL Petrie Museum, where her installation A Storm Is Blowing was on show over Summer 2013. Previous roles include Head of Interaction at Artangel.