ART OVER THERE / A CONVERSATION BETWEEN CURATOR MARIAM ZULFIQAR AND ARTIST MARK KING. 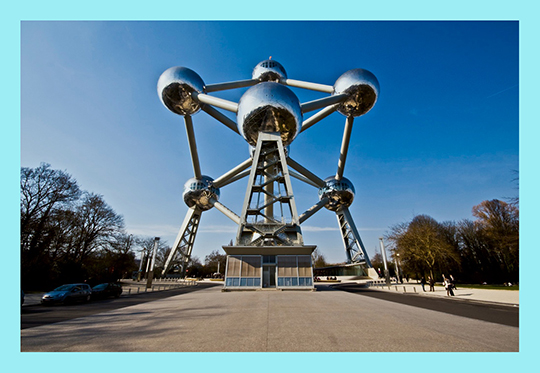 In this interview, artist Mark King and Curator Mariam Zulfiqar discuss the Atomium. The interview was conducted via email correspondence between Zulfiqar and King whilst the artist was carrying out an artist’s residency in Aruba. There are two descriptions of the Atomium offered before this article enters the discussion between King and Zulfiqar. The first description is that which the artist and curator wrote to describe the Atomium and its context. The second is the version offered by the current Atomium organisation:

The first World Fair to be organised in the aftermath of WWII was held in Brussels in 1958. Expo 58, held 13 years after the Atomic Bomb was dropped on Hiroshima and Nagasaki by the US, took ‘the peaceful use of atomic energy’ as its point of departure. Referencing the past while shaping the present and future, André Waterkeyn, the designer of Expo 58’s main pavilion the Atomium, produced a paradoxical structure that acknowledges the best and worst capabilities of human beings. (Zulfiqar and King)

The first World Fair to be organized in the aftermath of WWII was held in Brussels in 1958. The Atomium was the main pavilion and icon of the Brussels World Fair, commonly called Expo 58. It symbolized the democratic will to maintain peace among all the nations, faith in progress, both technical and scientific and, finally, an optimistic vision of the future of a modern, new, super-technological world for a better life for mankind. Referencing the past while shaping the present and future, André Waterkeyn, the designer of the Atomium, produced a paradoxical structure. (The Atomium)

Both are written here, one as an opinion piece, the other as the factual statement from the organization itself. The Atomium advised that the building should not be referred to as a ‘nuclear research centre’ as they receive many questions of that nature. Also they advised that André Waterkeyn did not “produce a paradoxical structure that acknowledges the best and worst capabilities of human beings.”

We have included both here for the audience to compare as they offer an interesting comparison between opinion and official viewpoint.

A conversation between the artist Mark King and Curator Mariam Zulfiqar.

MZ: When I invited you to collaborate with me on this article you chose the Atomium. What is it about the Atomium that made you select it for our discussion?

MK: The first time I saw the Atomium was in-person soon after moving to Brussels at age 12. I remember being in awe looking up at this giant iron cube standing on one of its corners. The structure was unlike anything I had seen before. The Atomium is one of those tourist attractions I never grow tired of.  The structure is an inspiration. It’s amazing that I can look back on something I first experienced as a kid and still be impressed by it.

My other reason for selecting the structure is due to the type of artwork I have been creating lately.  My geometric based work is creeping towards 3D sculptural representation.  It’s as if I am circling back to that first day standing at the feet of the Atomium. So this is the perfect time to assess what makes the Atomium so special to me.

MZ: Have you ever been inside or do you like looking at the Atomium from the outside?

MK: Yes I have been inside. But that was only on one occasion I believe. I definitely prefer experiencing it from outside.

MZ: You’ve grown up in the Washington DC and Brussels and now live in Barbados.  How would you describe your relationship with these three locations? How have these locations influenced you? And how does each new location alter your perception of the last place you lived in?

MK: I was born in Washington DC where and left at an early age; I returned at 17. A similar situation with Barbados, but I moved at 7 and returned at 26. I am a citizen of Barbados yet was more familiar with DC at the time I moved back to the Caribbean. Growing up in Brussels and attending international school instilled a unique international perspective. I was exposed to new worlds on a daily basis. Living in San Francisco and the Bahamas also left a lasting impression on me as well.

After moving cities or countries a few times you learn to appreciate all the good experienced in that place you once called home. The positives in my case outweigh the negatives. It’s all about keeping things in perspective. It may take a couple more moves for it to sink in but I would say that is the major take away.

MZ: Do you think nostalgia plays a role in how you perceive this structure?

MK: Most definitely. It takes me back to my teens. On my last trip to Brussels in 2011 I made sure I visited the Atomium.

MZ: How do you see the Atomium now that you have moved to Barbados – does distance alter your perception?

MK: I see it as an architectural feat and always have. Time more than anything has altered my perception of the Atomium. In recent years my curiosity has been pointing towards science, geometry and op-art, allowing me to appreciate all of the concepts that the Atomium embodies.

MZ: How does moving between continents affect or influence your work?

The grass is always greener on the other side, whether we’re talking Aruba vs. Barbados or London vs. New York. Not having a solid grounding in one particular place has allowed me to navigate multiple spaces as an outsider who mingles with insiders. My perspective is slanted due to the fact that I’ve only lived in the West, but it isn’t that biased since I went to international school from an early age. I have friends who live all over the world and have continued to travel and met a wide range of people. Moving around allows me to see how different yet similar people are.

Mariam Zulfiqar is a curator whose recent work includes projects for Art on the Underground and Film and Video Umbrella. She has just completed a research residency in Barbados which will culminate in a forthcoming exhibition that explores the impact of plant migration on the Barbadian visual and social landscape.