ART OVER THERE / CITIES AND MEMORIES: A PORTRAIT OF VENICE BY SIAN GLEDHILL.

In this article, artist Sian Gledhill describes a visit to Venice during the 2013 Venice Biennale. Through a personal exploration of place and memory, response and encounter, she looks anew at both the city and its relationship to the infamous art festival. 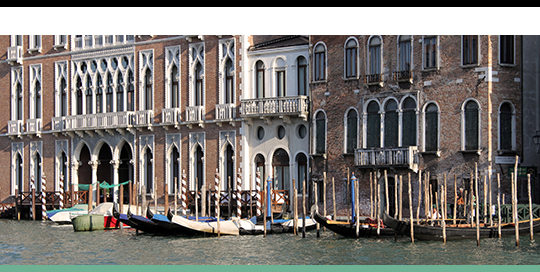 It is mid August and I find myself propelled back into the Venetian landscape. Arriving by waterbus, my slow moving approach serves to resynchronize me with Venice’s distinctive rhythm and modes of travel. Returning to this timeless city, the wave of memories of previous visits flow freely, picking up from where I left off.

Venice as it stands today does not speak of the future but of the present and its past. Ingrained like the lines on a hand, its history can be observed tracing its crumbling passageways, walking the worn paving stones and ‘slender stilts’ jutting out in the grand canal.

Venice is a city unaffected by the passing of time, it is the same as it’s always been and always will be. An eternal picture postcard, it suspends itself in dreams, halfway between nostalgia and truth. My return is filled with familiarity. Memory and reality constantly shift back and forth, like fleeting paraphrases. Scaffolding migrates to regenerate a different neglected façade, and algae clings thicker and heavier to the ‘flamingo legs’[1] that stands tall above the water. I enter the realm of disorientation and déjà vu, where fact and fiction inextricably intertwine. Can I be objective about the present, when I am forever looking back?

Venice is a city that has managed to evade the modern world. On this latest visit I witness tourists’ futile attempts to navigate the city armed with new technology. IPhones now replace maps as their objects of focus, clinging onto them tightly in their hands for some kind of reassurance. The latest apps now replace those cumbersome heavy guidebooks; fully interactive and loaded with photos of the sights they are standing next to. A man holds an iPad out flat in front of him, his head down fixated on its screen, guiding his family with absolute assurance in his compass app. More so than anywhere else I witness technology replacing natural instinct.

I put away the map and wander deeper, hoping that soon I will come across a familiar square, church or restaurant. I begin to map in my mind the memory of past visits. On this revisit I am no longer intimidated by its labyrinthine passageways. Instead I put my faith in memory.

In Venice, Google maps, or even maps in folded ephemeral form, should not serve as a replacement for the memory map. The hard truth is that we cannot truly understand the city through maps. We have to walk the streets; to experience them first hand. ‘As soon as the unseen is mapped, it leaves no space for beliefs and speculations, it stops to be transcendental.’[2] In Invisible Cities, Italo Calvino’s protagonist remarks on the futility of explaining the city, ‘I could tell you how many steps make up the streets rising like stairways, and the degrees of the arcades’ curves, and what kind of zinc scales cover the roofs; but I know this would be good as telling you nothing.’[3] 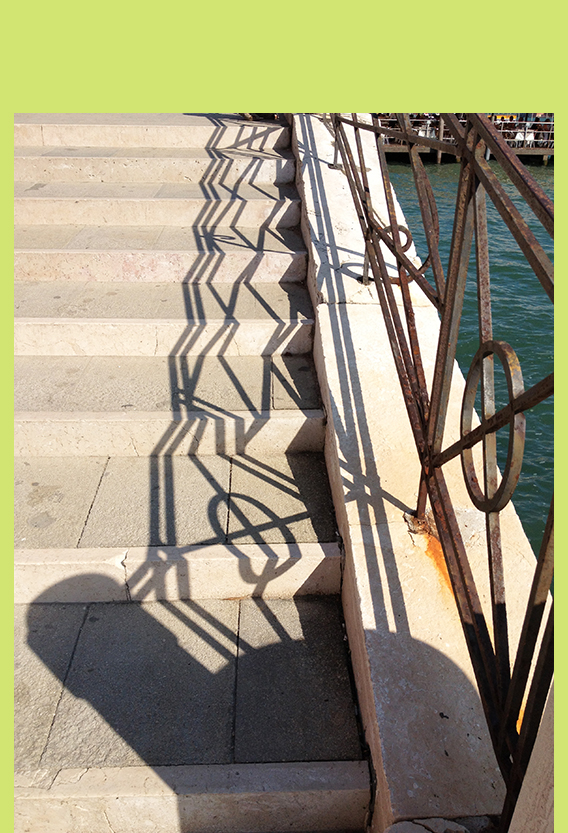 The Venice Biennale provides a rich picking of art for anyone prepared to traverse the endless miles back and forth across the city. Detective like I find myself submerged in a quest, a scattergun approach, zigzagging through narrow passageways, across piazzas, up and over the Grand Canal, all in search for those elusive Pavilions or artist interventions.

The hunt only serves to enhance the sense of reward upon discovering a pot of gold buried deep within the Venetian labyrinth. The Biennale map, both vital and vexing in equal measure, points to the treasure. Each dot deliberately ambiguous in its location and content. Wandering through the San Marco district I take a gamble. Opting against an obvious cluster, I set off for a singular dot lying on the edge of the Grand Canal, equidistant between the Rialto and the Accademia.

This gamble pays off upon finding the Irish Pavilion. In stark contrast to its setting alongside the Grand Canal, I enter a dark room far removed from its locale. Within this space is Richard Mosse’s immersive multiple screen film installation The Enclave. It captures an astonishing portrait of the forgotten war of the Democratic Republic of Congo. Using a special type of military reconnaissance film originally designed for camouflage detection, Mosse turns rebel-filled forests into a psychedelic palette of cobalt, magenta and puce. Immersed in all its horror, The Enclave produces a wonderland of cruel and indelible beauty. 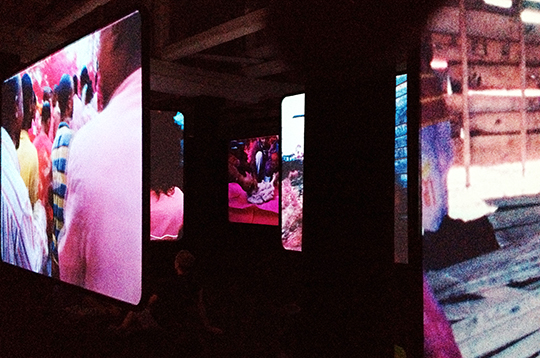 The central theme of this year’s Biennale derives from Italian-American artist Marino Auriti’s design for a museum that was meant to house all the world’s knowledge. The Encyclopedic Palace is described as ‘an exhibition about the desire to see and know everything, and the point at which this desire becomes obsession.’[4] Sometimes the Venice Biennale feels like a pursuit of the impossible dream of universal knowledge.

The Arsenale is the fortitude of Venice’s long-standing naval history. The largest pre-industrial production centre in the world, these shipyards still remain a potent symbol of the military, economical and political power Venice once had. At the peak of its efficiency its workforce churned out vessels at a rate of one per day. I think of this as I make my way through the vastness of the Corderie, finding it hard to disengage with the sense of longing as I navigate the endless rooms of art, one after the other like a production line. 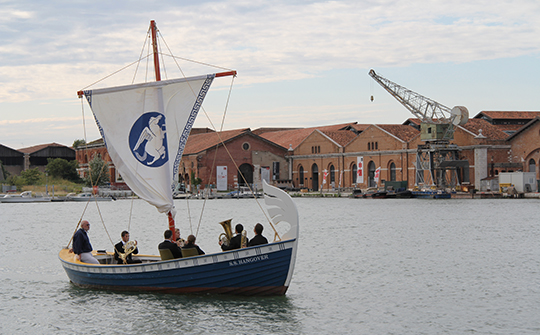 S.S. Hangover is a performative sound sculpture by Icelandic artist Ragnar Kjartansson consisting of a sailing ship adapted by the artist and a composition for six brass instruments. A continuous performance that exists daily for the duration of the Biennale, it will still be there as the weeks gallop towards November, always returning and departing in the mists, long after the summer haze has passed and the Autumnal torrential rain sets in. The music elicits a kind of emotion that makes the hair on the back of my neck stand up; touching everyone who stopped to listen to the elegiac music, and to witness this poignant vision of sailors crossing the bar.[5]

Fascinated by the defunct, the obsolete and redundant forms of storytelling, Sian Gledhill is an artist whose work oscillates between reality and construct, past and present. Through performance, film and printmaking she conducts playful interventions.

Sian Gledhill graduated from the Royal College of Art in 2012, her recent projects include Neither Here Nor There, Morden Hall Park 2013; contributions to Jonathan Wright’s residency The Quiet and the Still, Transmission Arts, NY; Multiplied Art Fair, 2012.